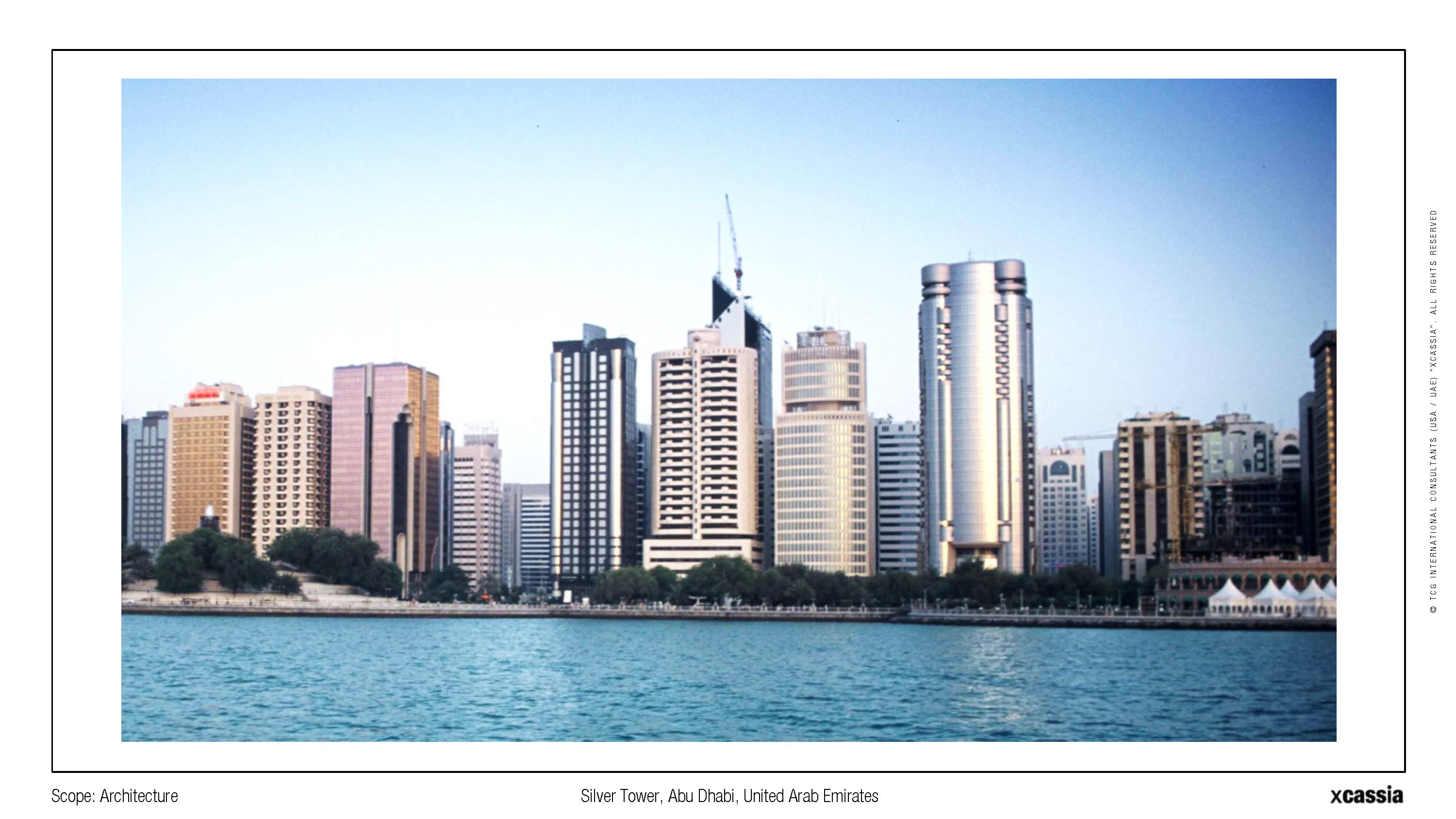 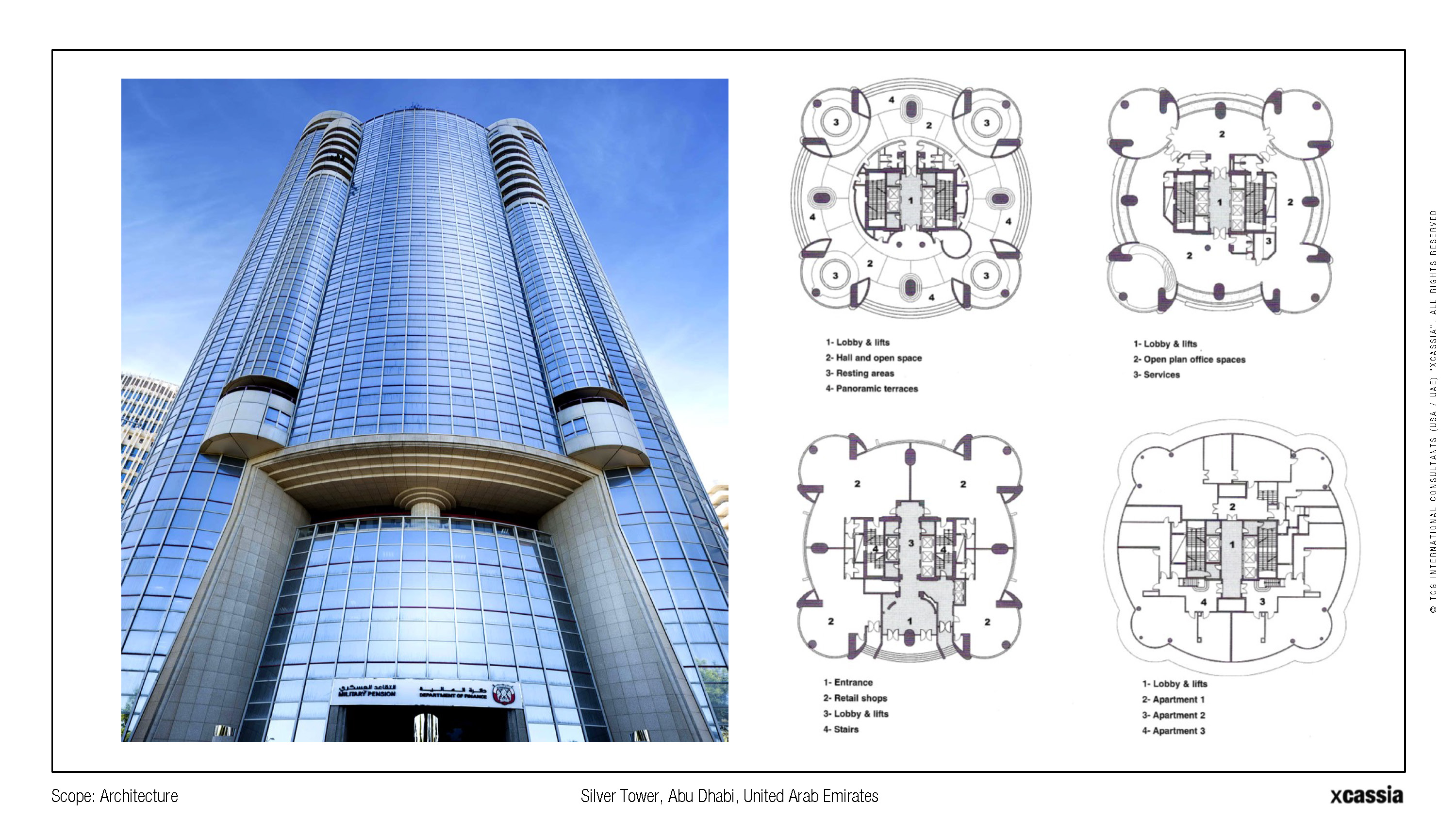 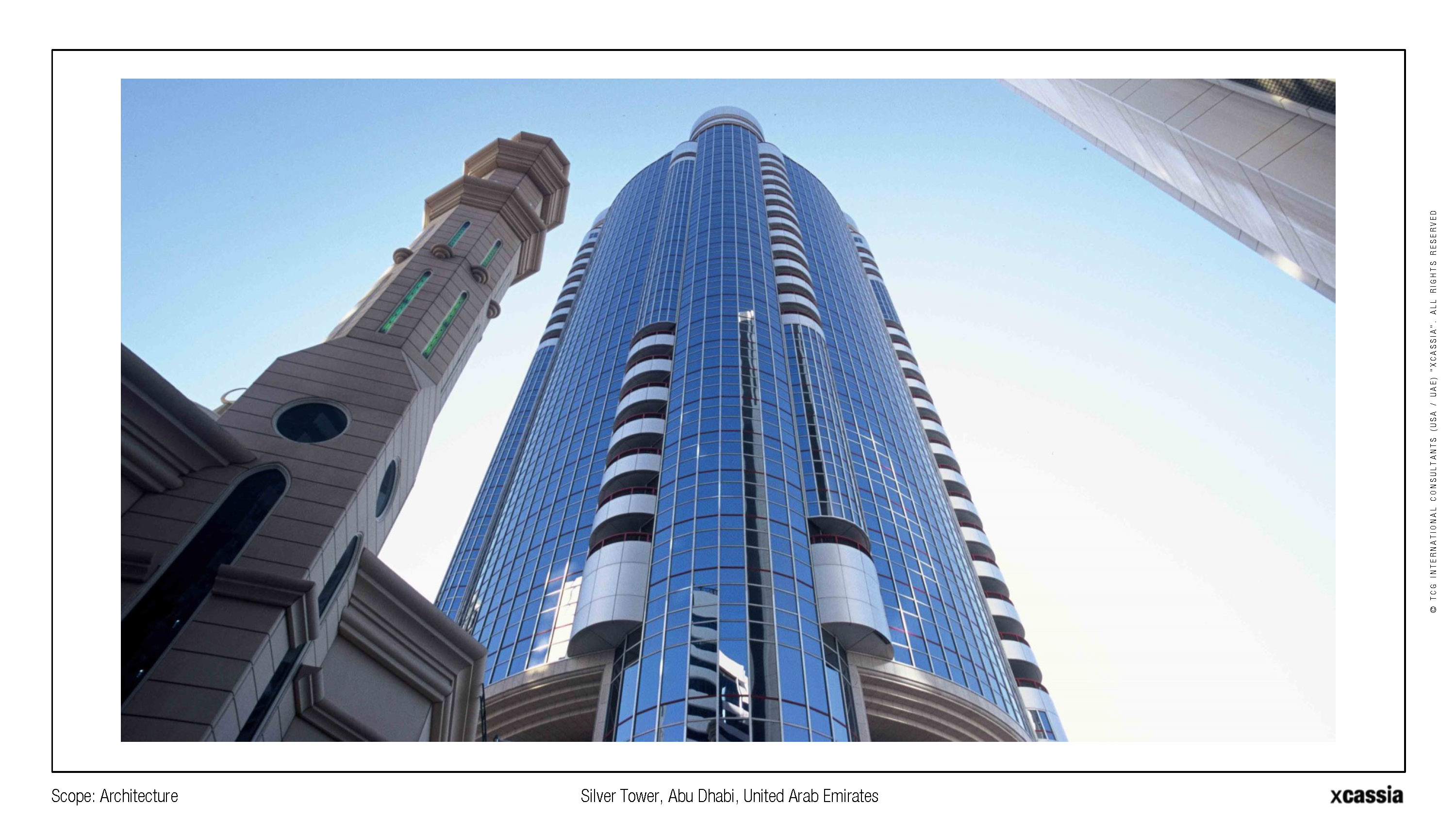 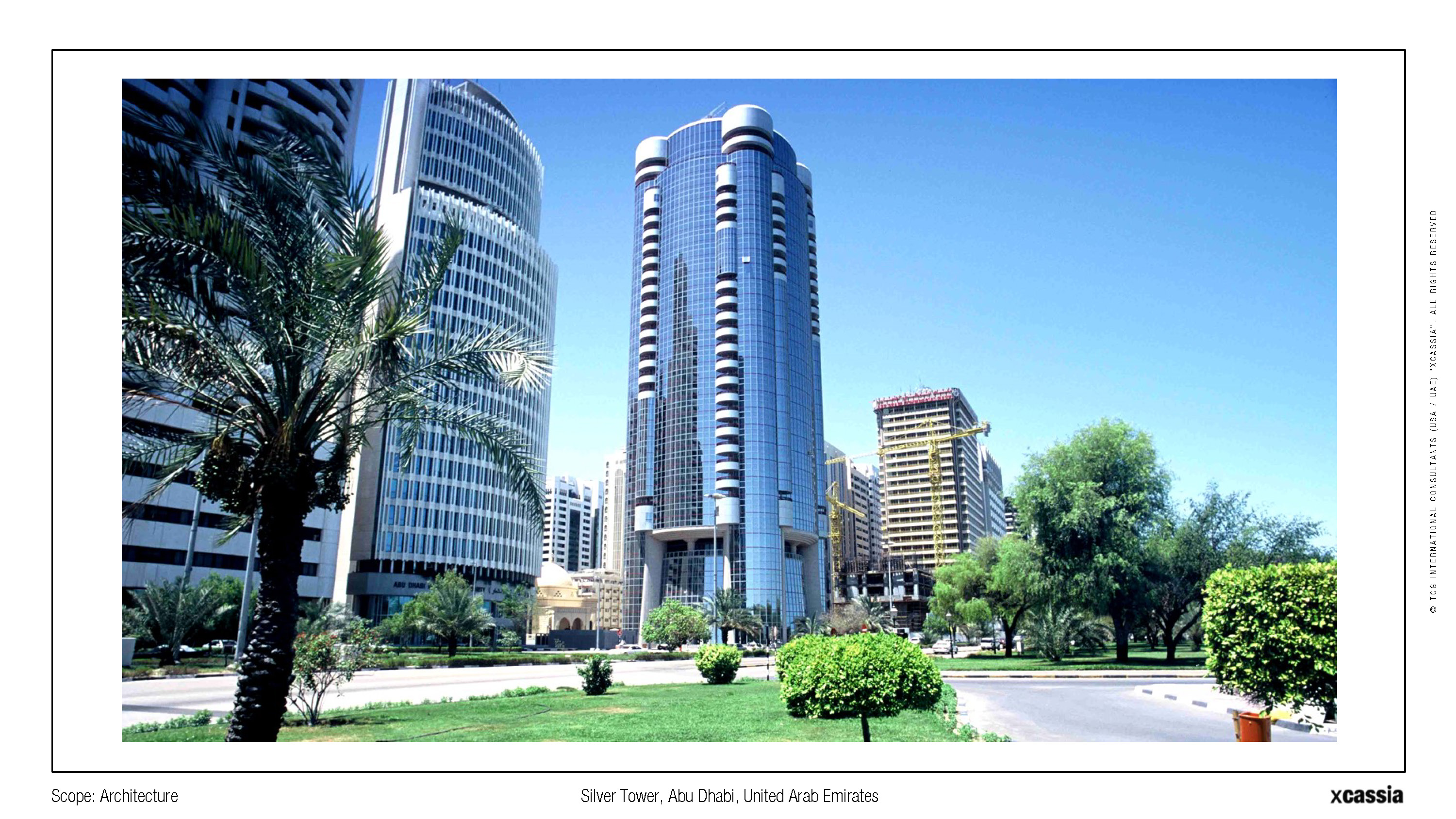 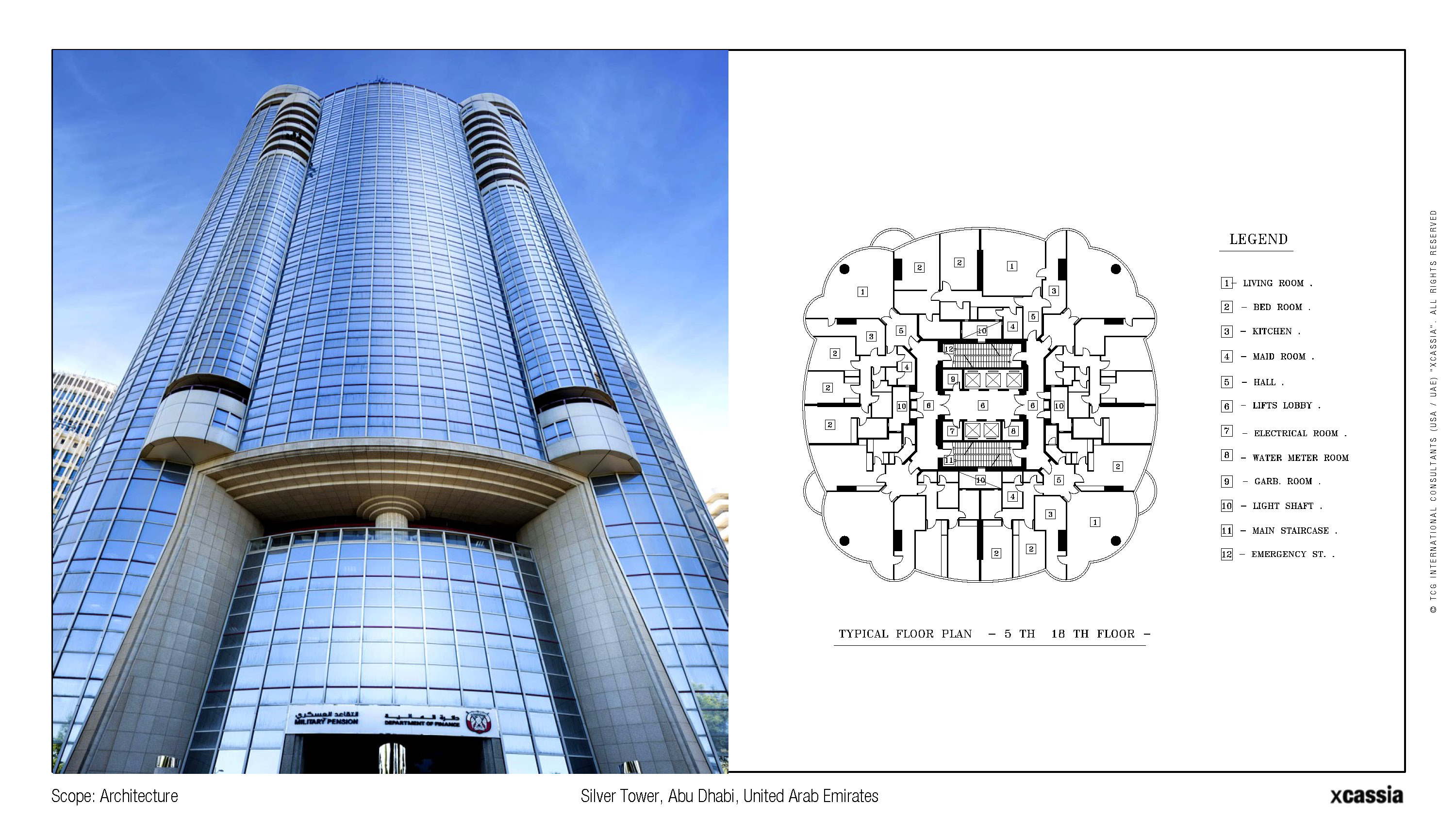 For years, this was the landmark in Abu Dhabi, the capital city of the United Arab Emirates. The silver tower is located on the main coastal road and corniche overlooking the sea and coastal façade of the city. With offices on the first three levels followed by 25 floors of apartments, this 30,000 sqm city tower offers spectacular views over Abu Dhabi and the waterfront.

The design brief required the building to be a mixed use facility with a bold and modern architectural expression that would make it a recognizable landmark in the city. Despite the height and setback limitations, the challenge of creating this landmark was successful due to the simple form used throughout the tower. It was one of the first in the city to utilize a circular floor plan.

At the base of the building, grand gates are located on all 4 sides. With granite cladding, they represent a solid form from which the high glass “cylindrical” tower projects into the sky. Despite being circular in plan, the four corners of the site are highlighted by 4 smaller cylinders running from ground level to the top, where they get crowned with solid rings of metal cladding. Those four cylinders don’t simply intersect the large Middle Core cylinder of the building. A third set of smaller cylinders in form of balconies stretch against those 8 intersections. They enhance the unity of the building as a whole and they add to it a spiral movement as the balconies are distributed on different levels in a gradual manner.

The building is fully covered with mirror blue tinted glass that reflects the colors of the sky and make it blend into any mood of the day. The architects touch in using red is clear here as well. Red balustrades on balconies and repeated red aluminium frames throughout the façades add a little touch of contrast to the overall color scheme.