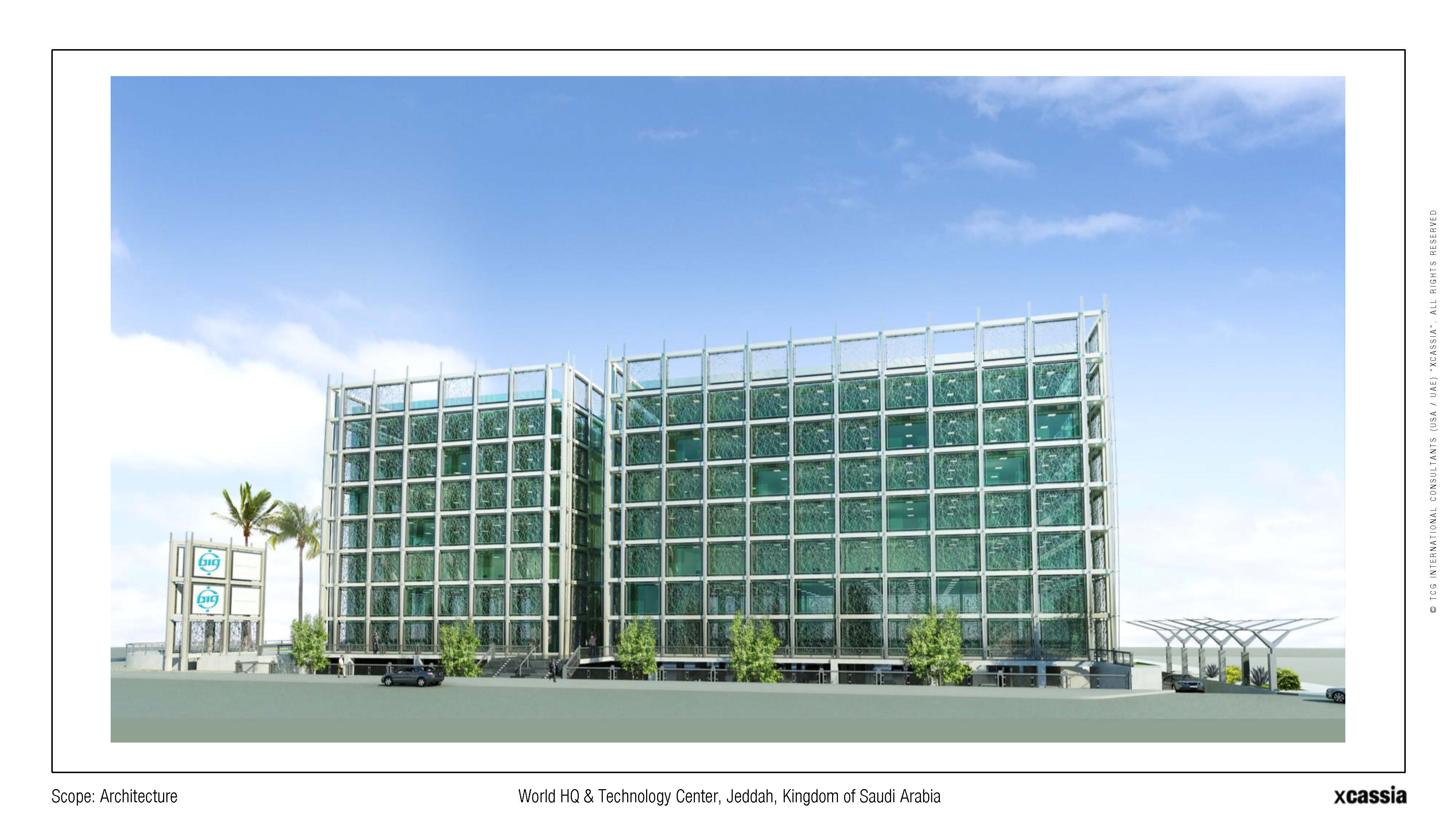 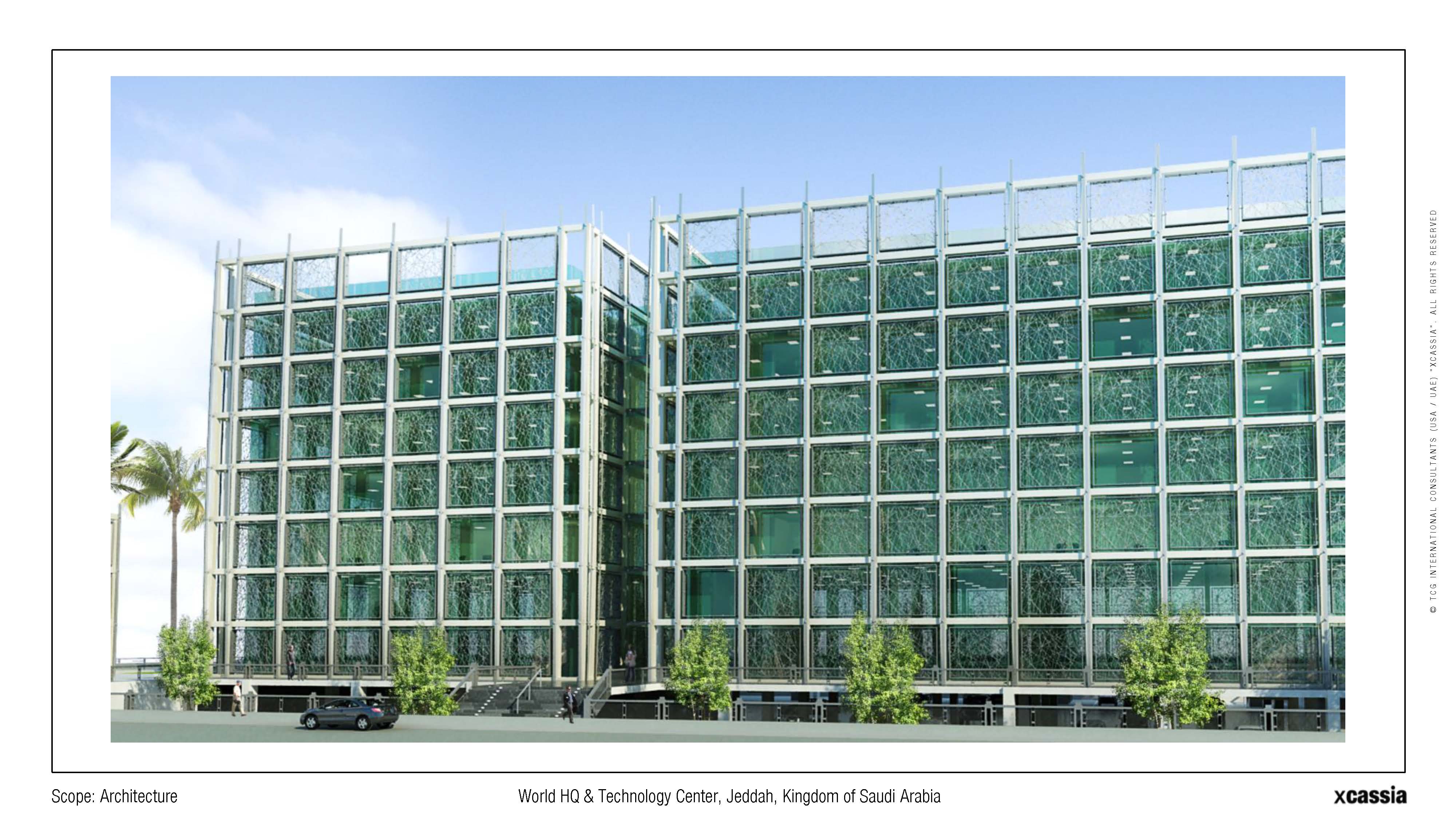 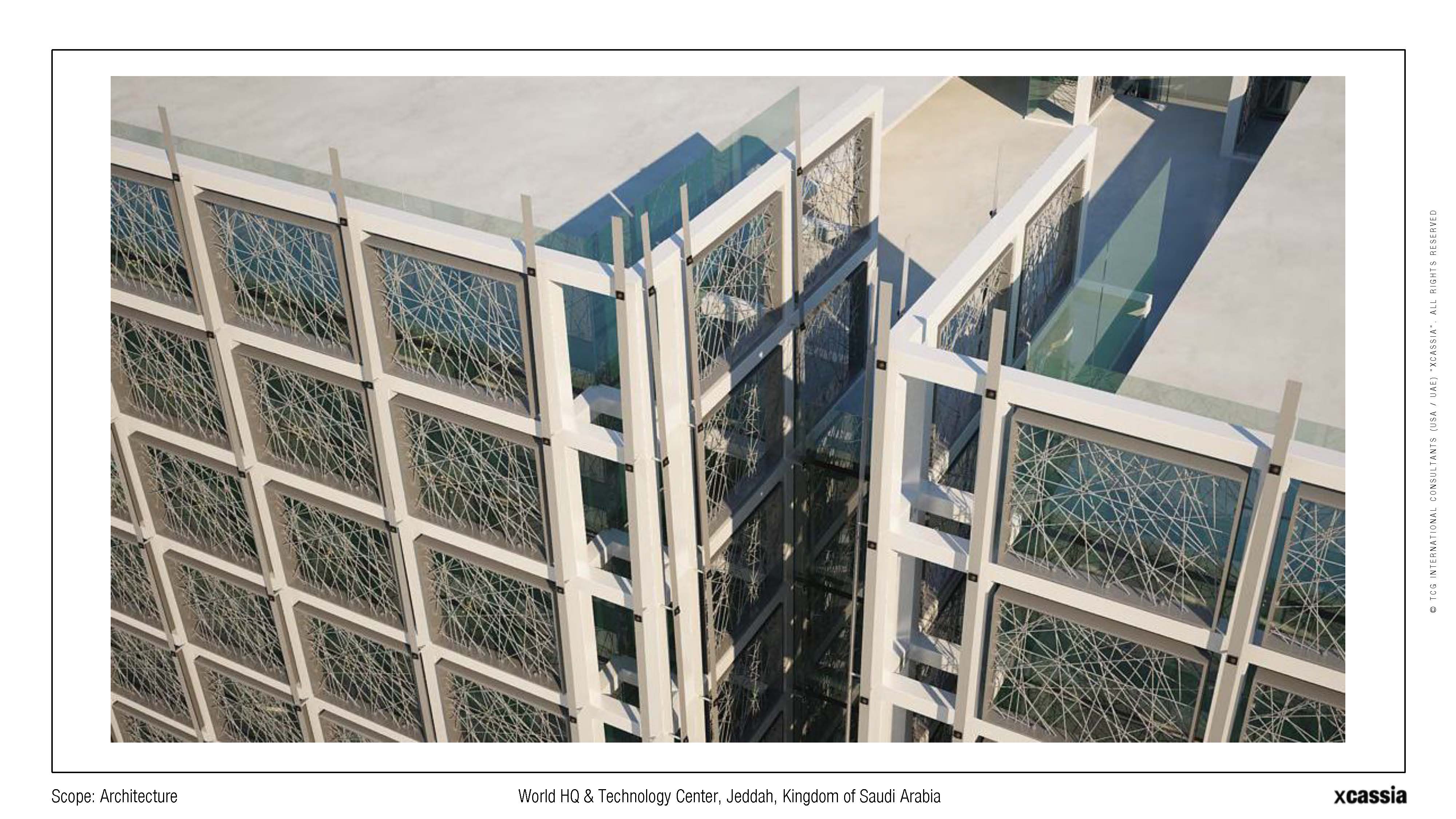 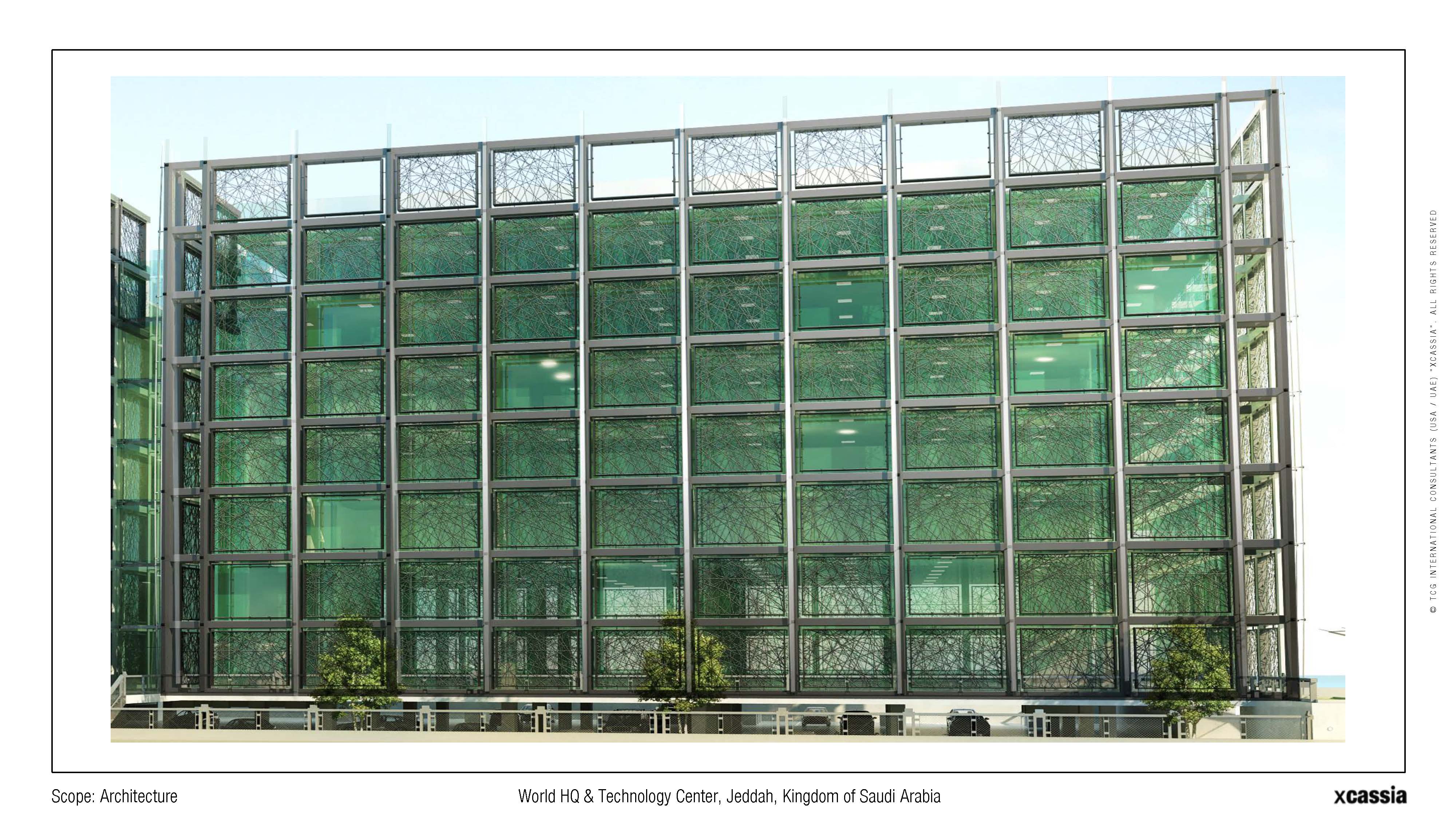 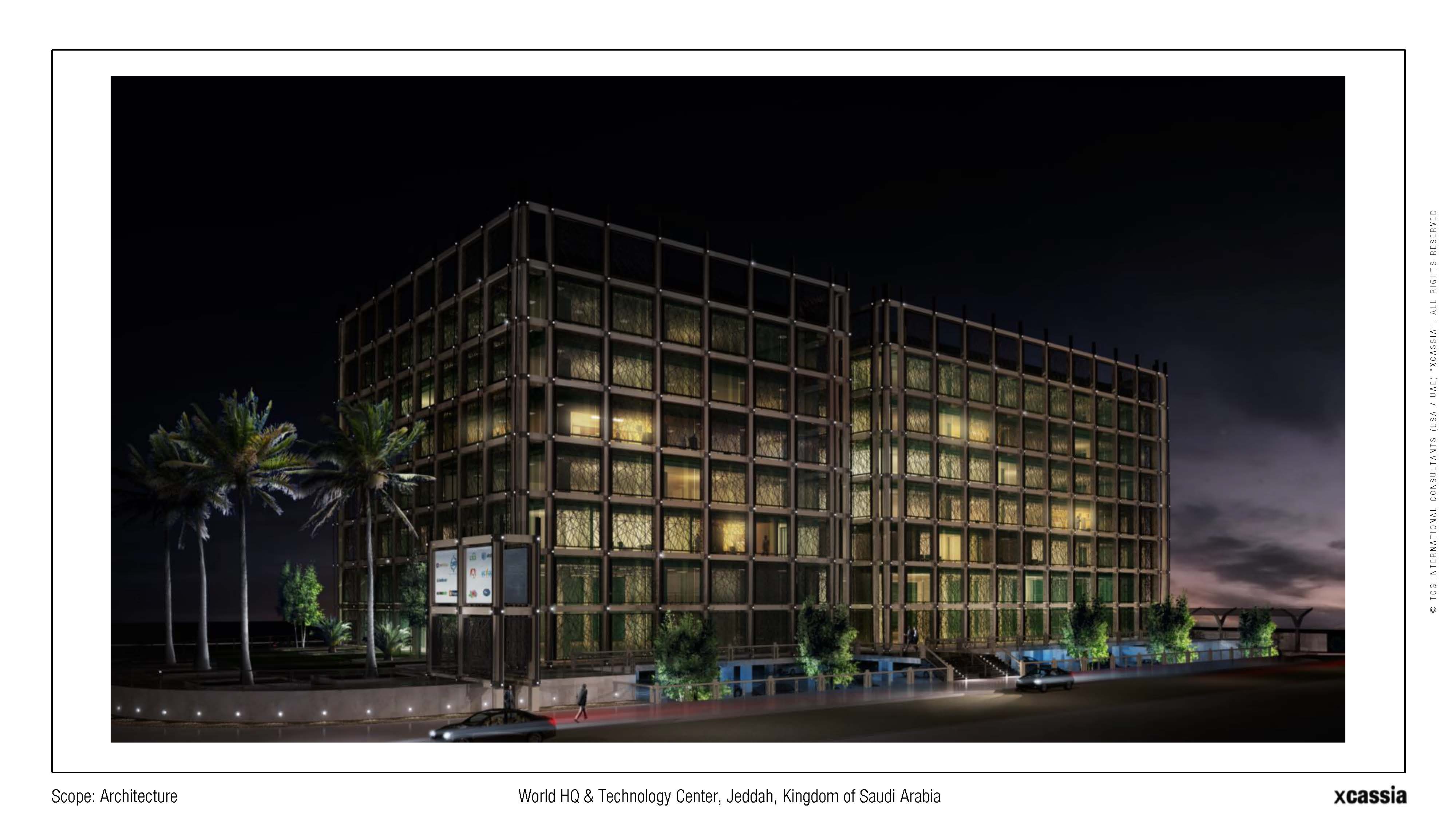 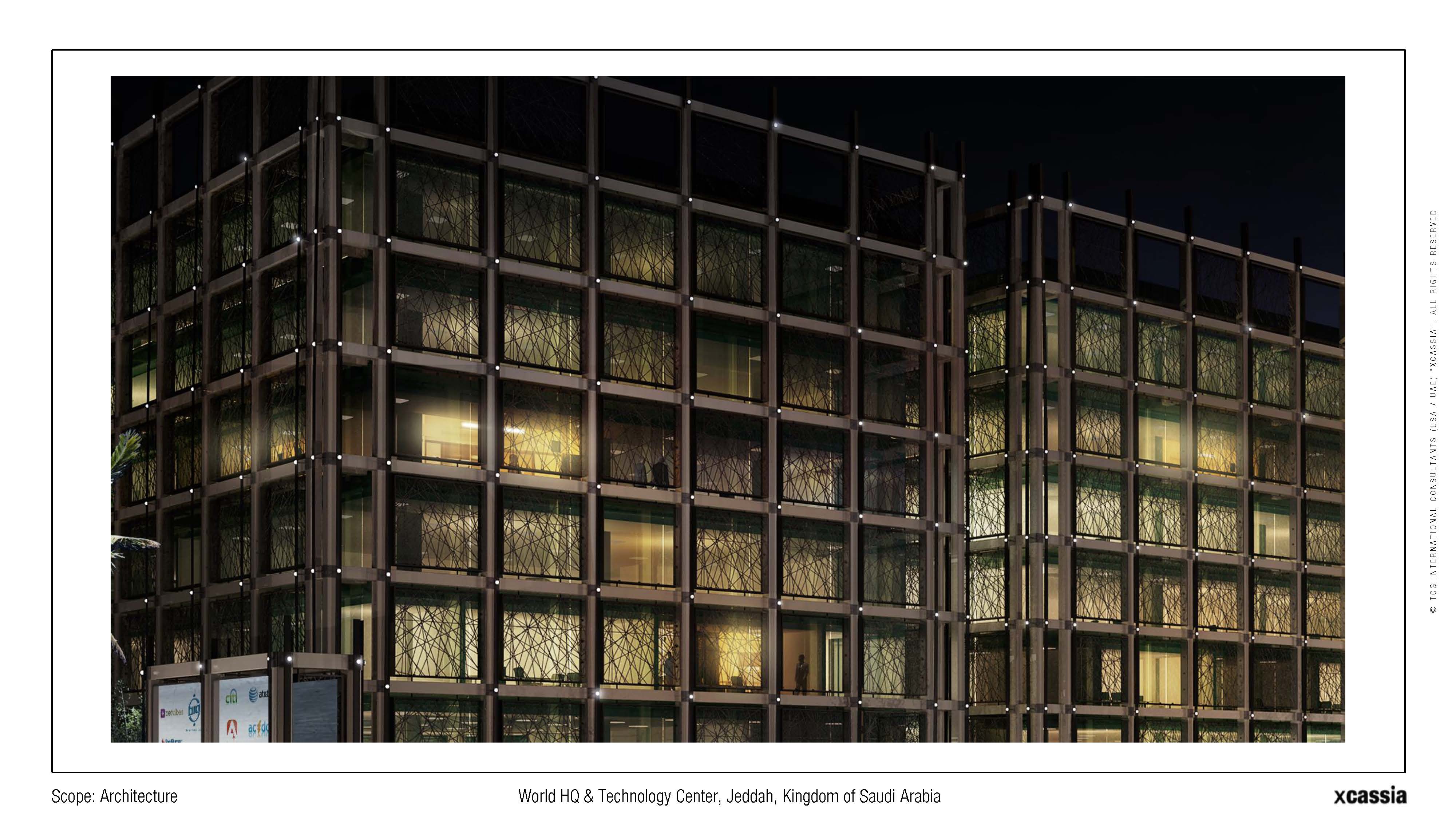 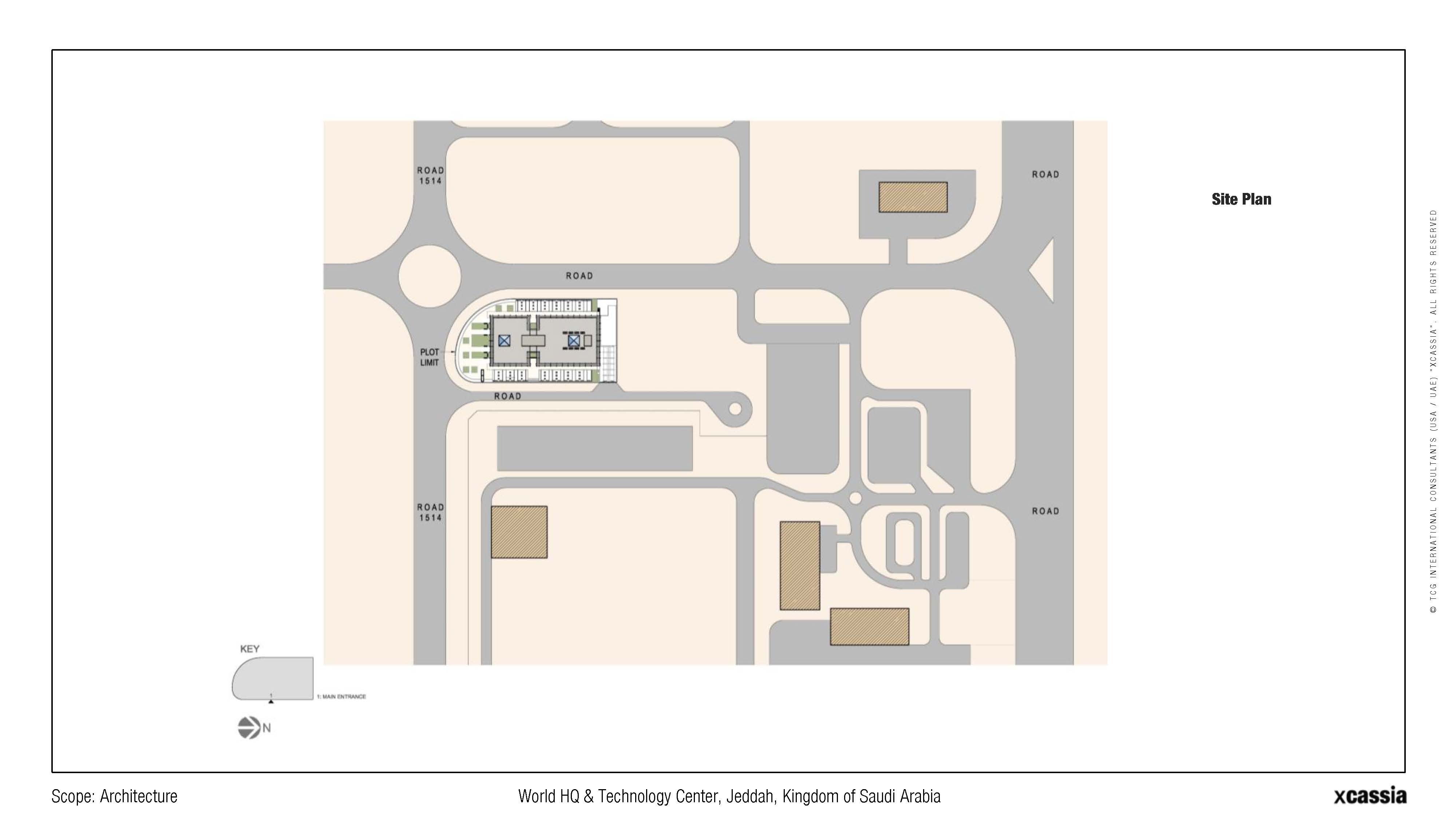 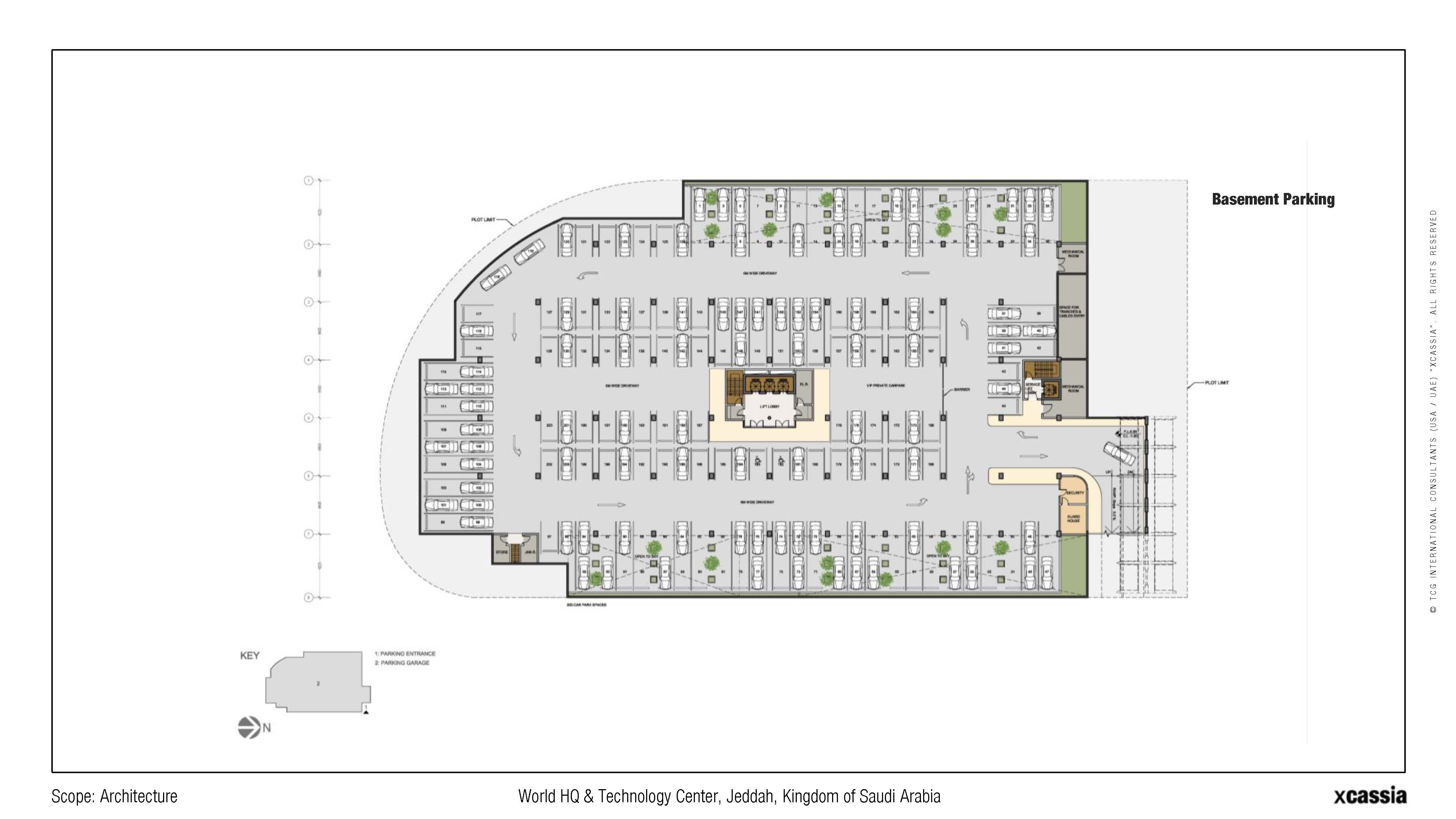 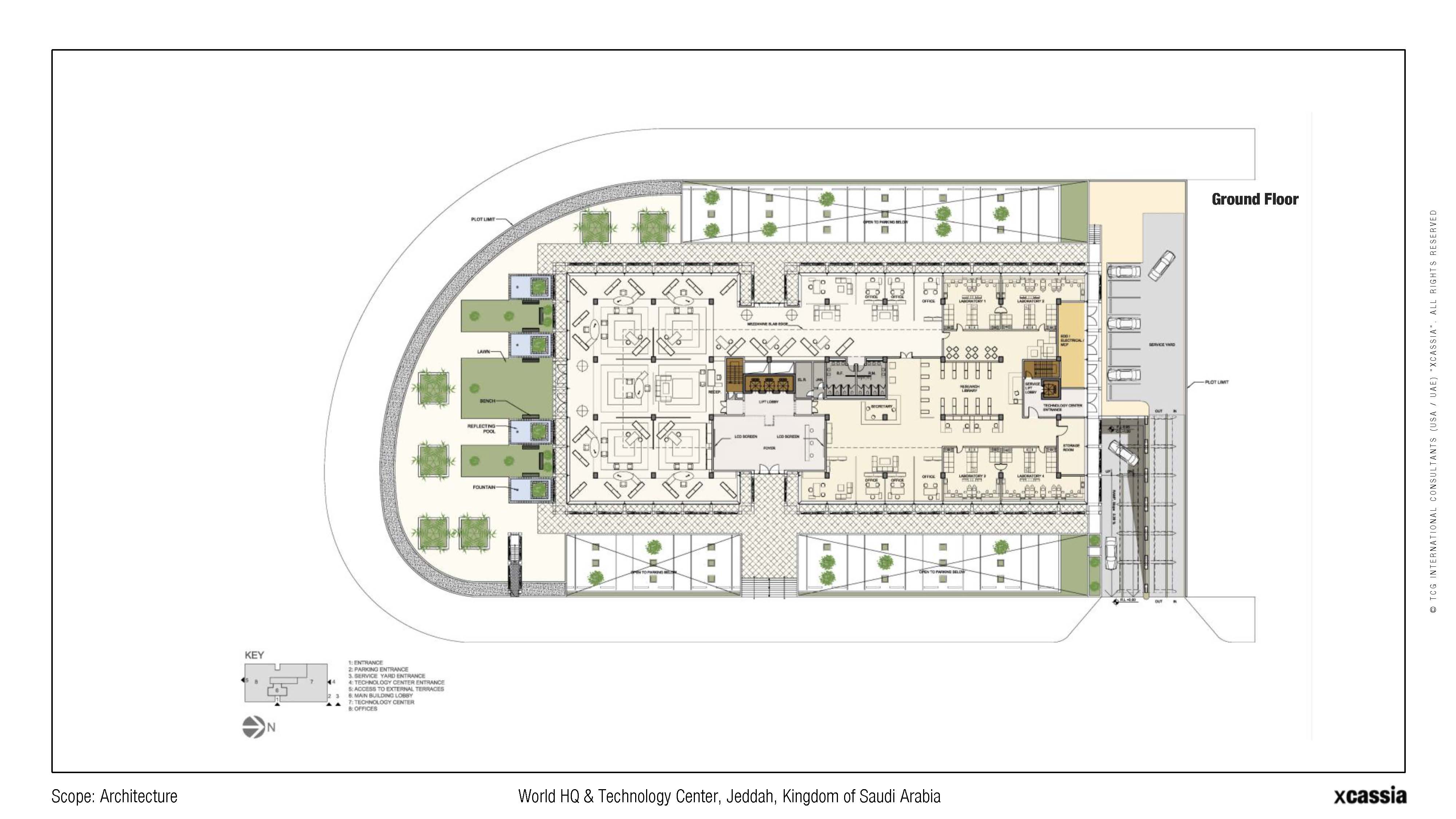 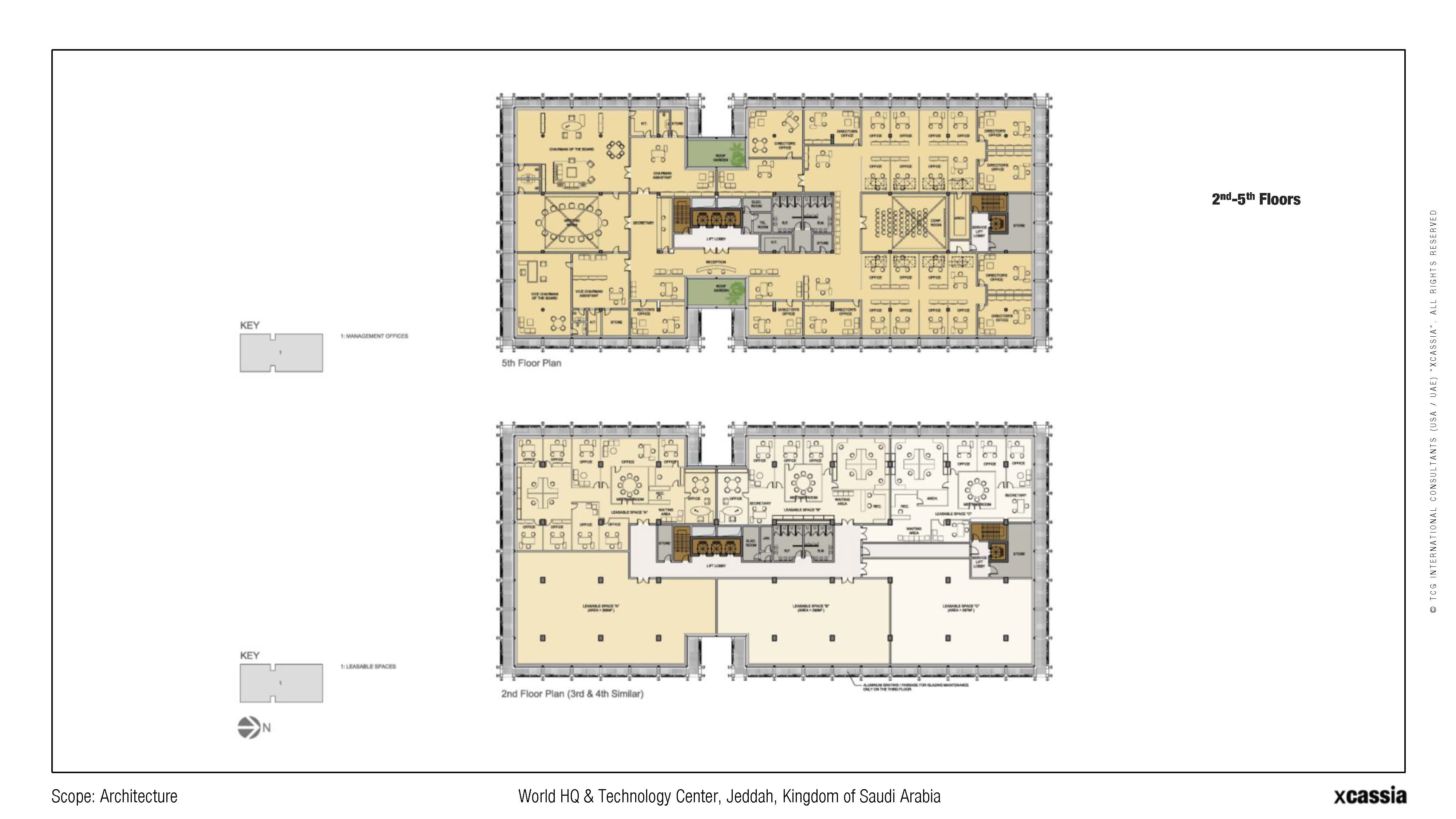 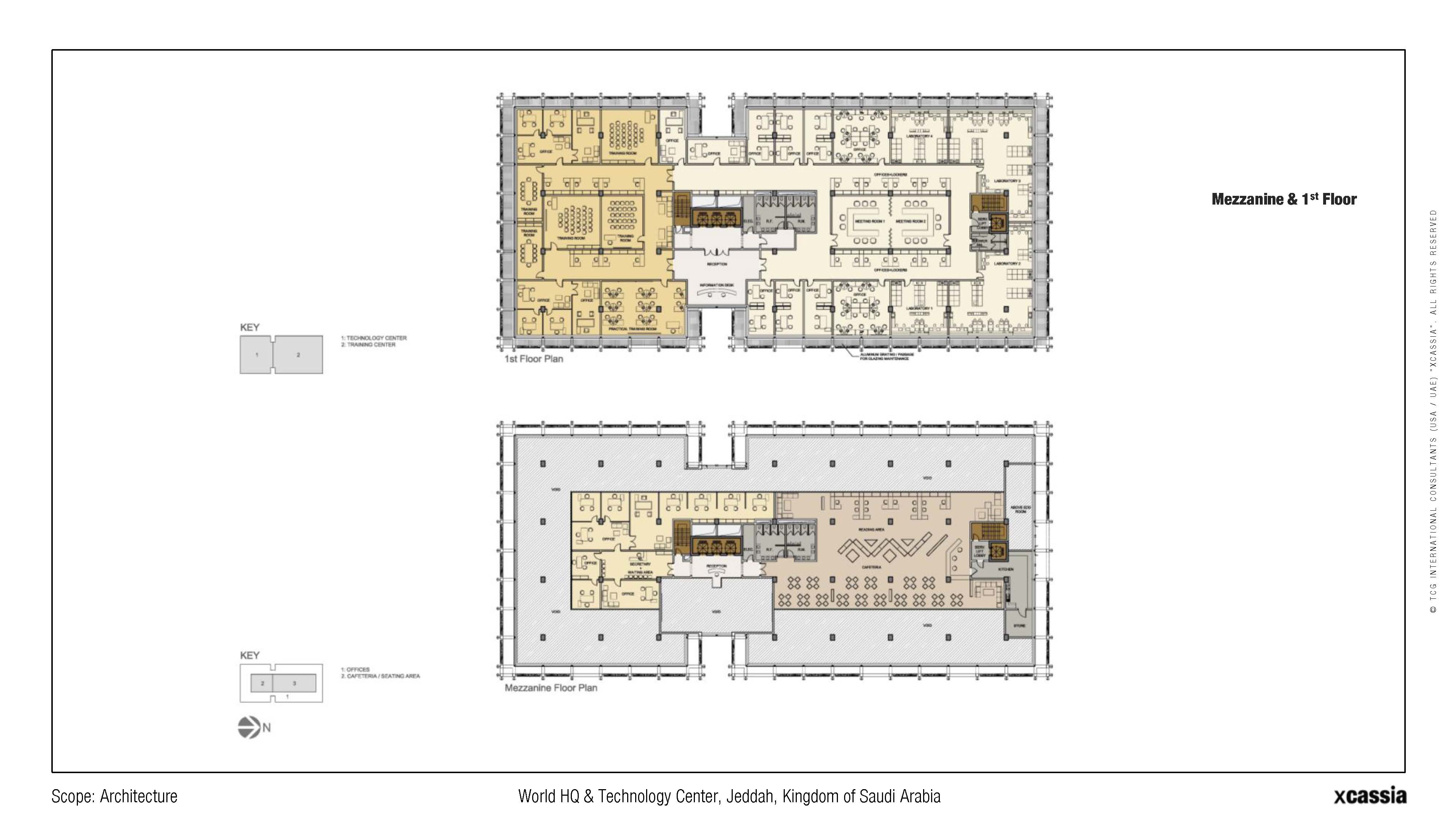 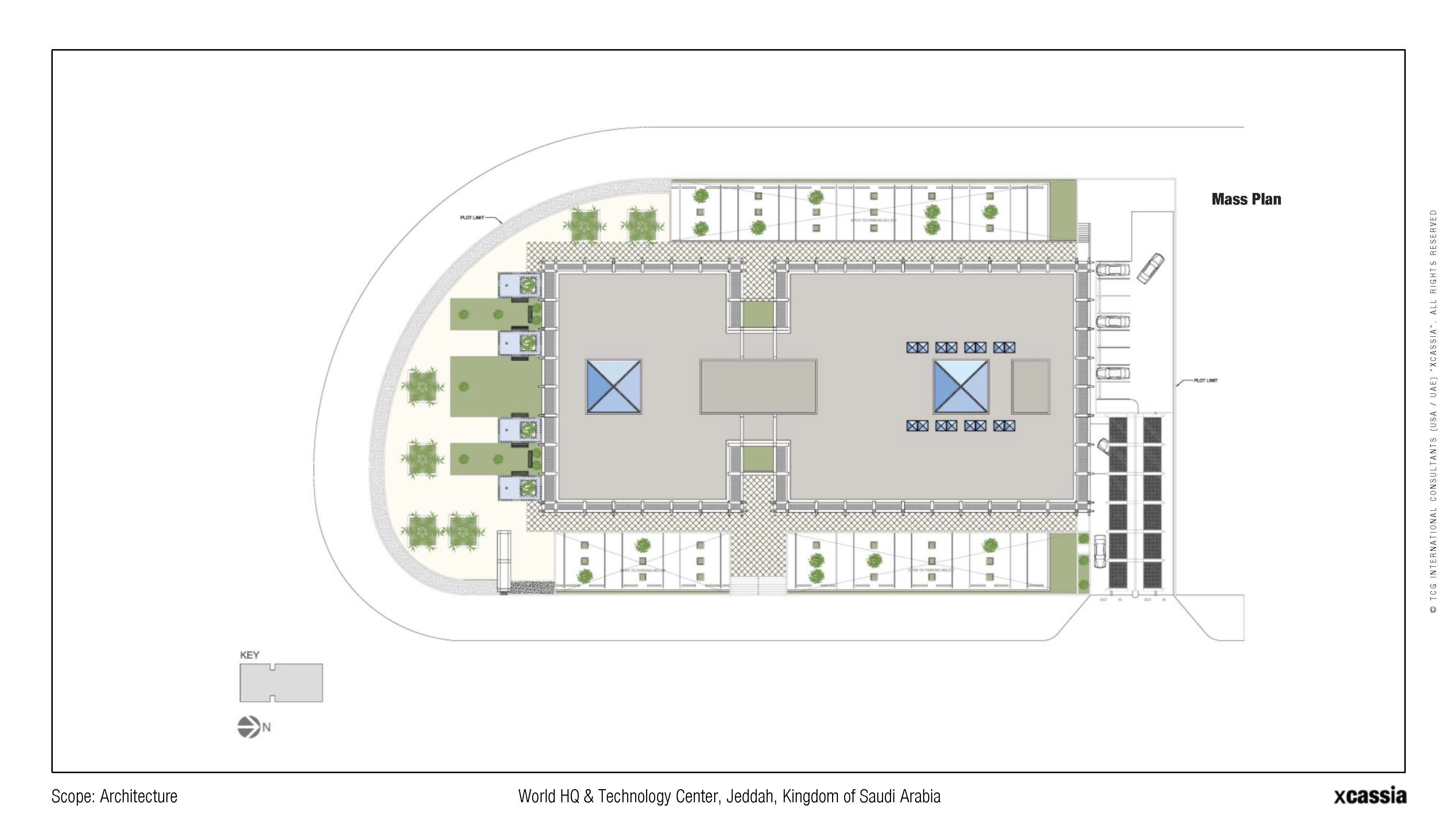 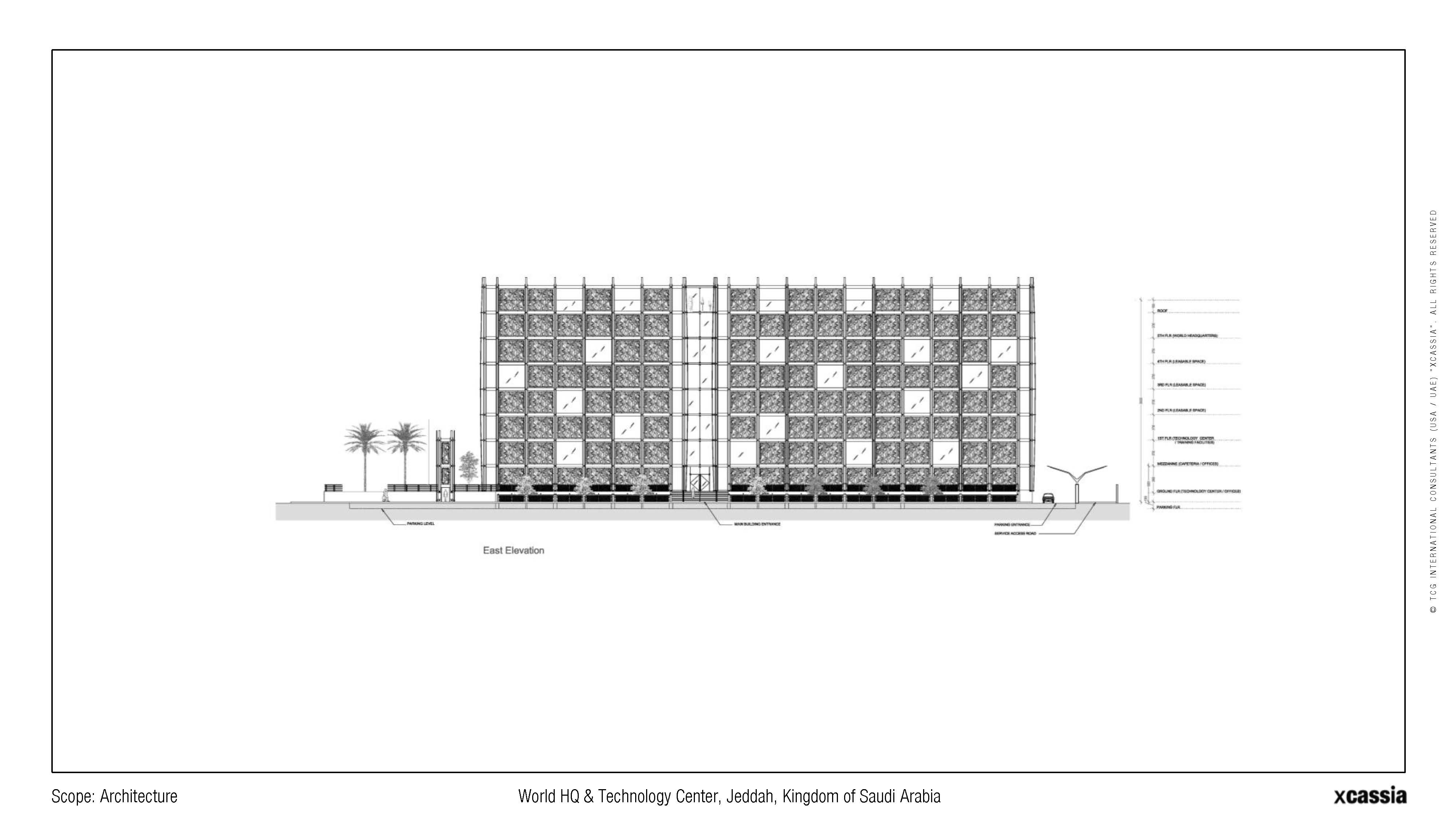 xCassia completed a conceptual design proposal for this 21,244 sqm world headquarters and technology centre technology in the Bahrain International Investment Park (BIIP) in Al Hidd, which is in close proximity to the Bahrain International Airport and Al Hidd harbour. The plot is located on one of the three main roundabouts of the business park, adjacent to one of the access roads. The Client brief called for an efficient design that combines a high-tech and traditional vernacular language.

The building contains the Client's Research Centre, Main Offices as well as 3 levels with a total of 18 office suites which can be either leased or used by the Client. The massing consists of two north-south rectangles punctuated by the entrance volume and laid out 1.5 meter above ground on top of a half basement that contains the parking facility, leaving a strategic area for landscaping facing the roundabout. The specification for the glass shall purposely allow for maximum light transmittal that is given added efficiency by the screens. In between the glazing and screen facades are service walkways that will facilitate building maintenance without the use of a building maintenance unit (see section). The entire building was raised by 1.5 meters above grade to permit the construction of a half basement for the 210 parking spaces required for the Client and office tenants.

The concept for the lighting design will be to express the dual nature of the facade’s modern / traditional character at night. The use of a light dynamic lighting scheme in the basement will further transform the building mass into a light, nearly floating volume. The basement lighting shall be connected to an automatic dimmer that will be programme to “glow” at night. Very discrete LED points will be included at the intersection of each horizontal and vertical members of the external facade and the afterhours lights left on inside the building will clearly articulate the glass volume within. To achieve this, uniform levels of illumination will be required on the internal facade.

A large signage “totem” which carries the logos of the occupants has been placed towards the Southeast corner of the plot. The structure of the totem mirrors the structural system used for the façade, and elevates it to form part of the branding of the building. The project floor plate is a rectangle 80 meters in length by 36 meters in width on its typical levels, and is designed with continuous and very efficient column layout placed on a uniform 8.4m x 8.4m grid without any transfer structures. The design contains 12,995m2 in rentable areas, which means that the efficiency of the building is 82%.

55% of this area is used for the Client offices and includes the Executive and other offices, technology centre, training centre and a cafeteria. The remaining 45% of the area has been divided into 18 leasable office suites of between 300m2 and 400m2. These suites can be used by used by the Client or leased to outside firms.