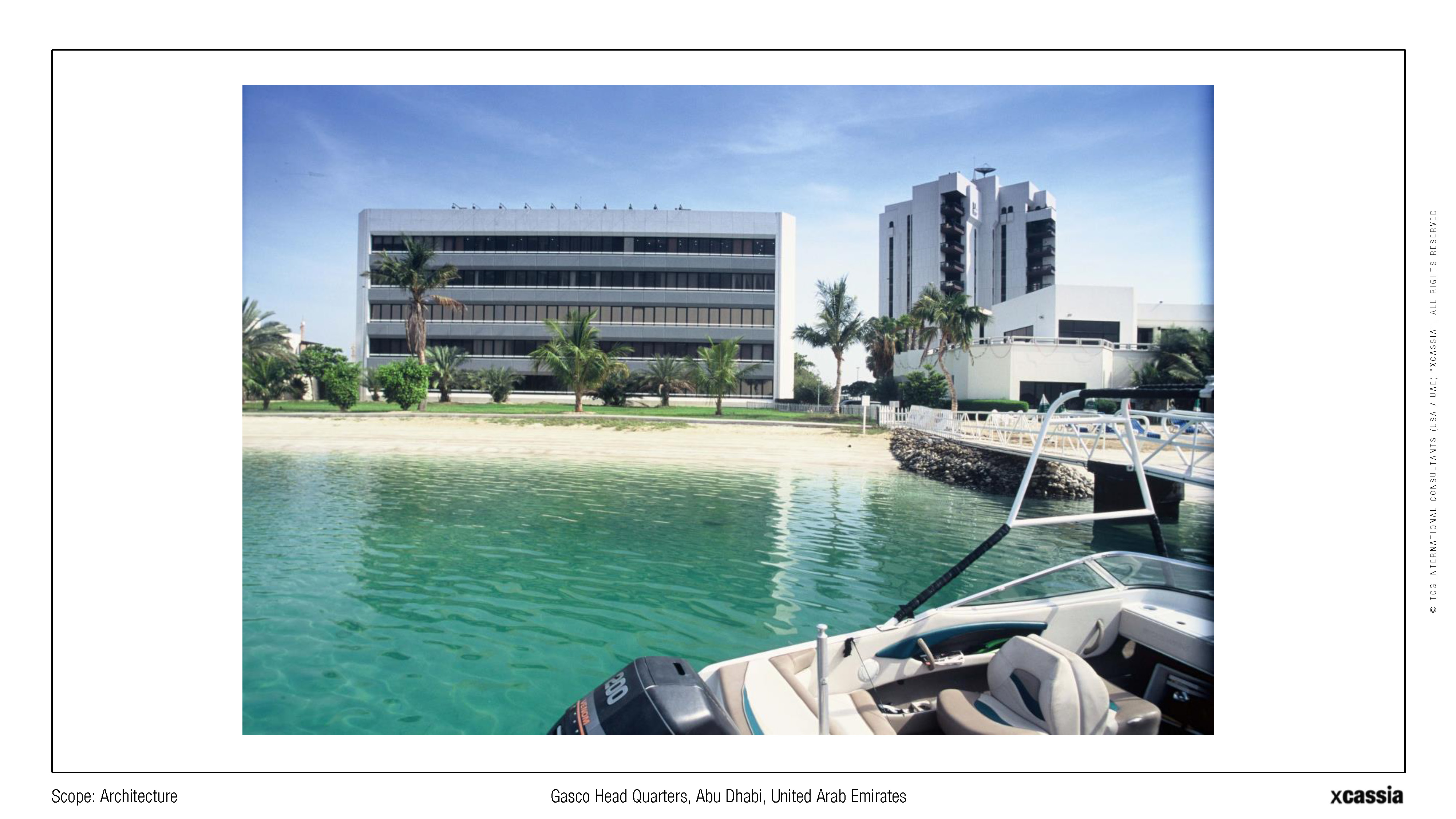 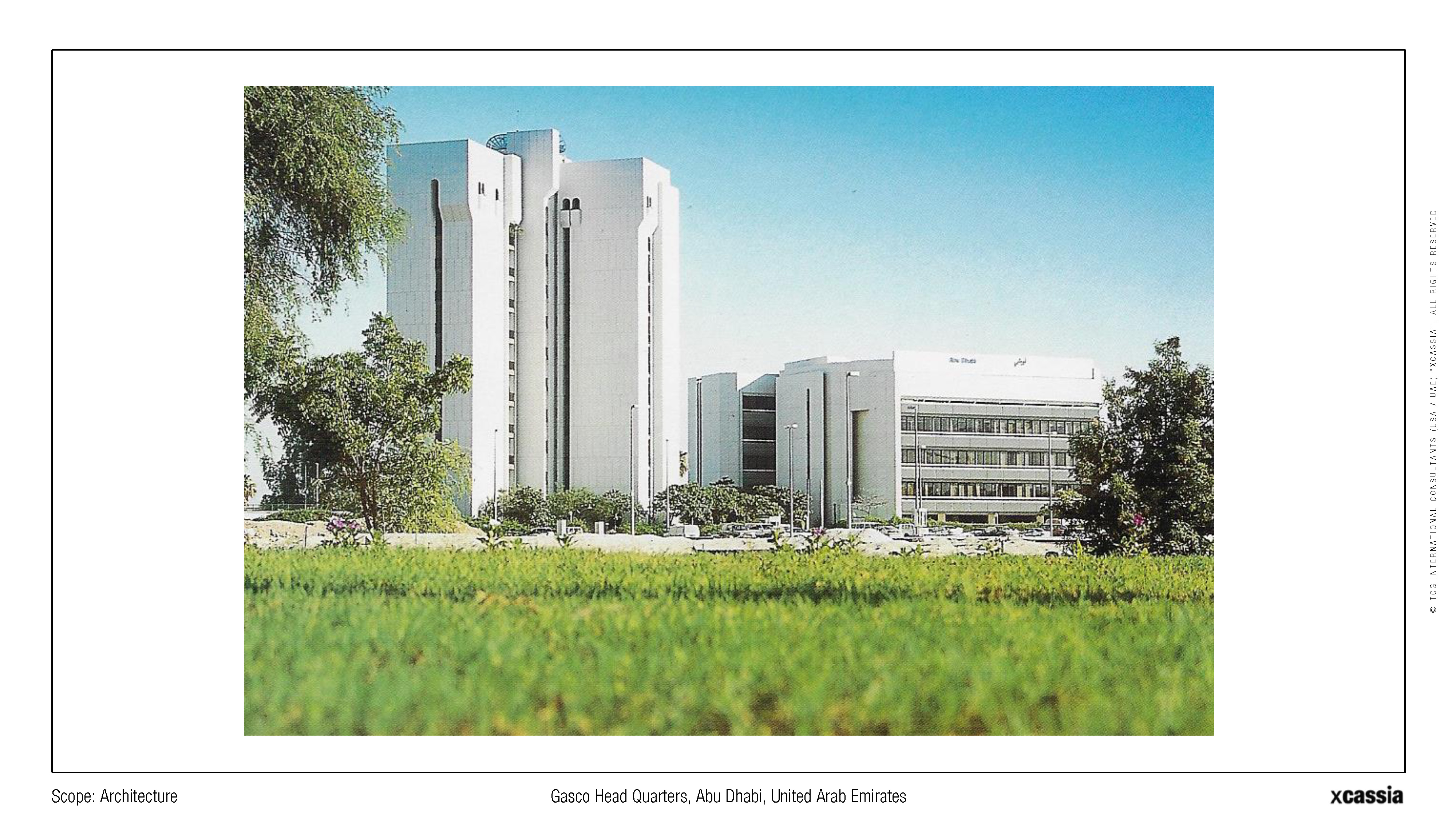 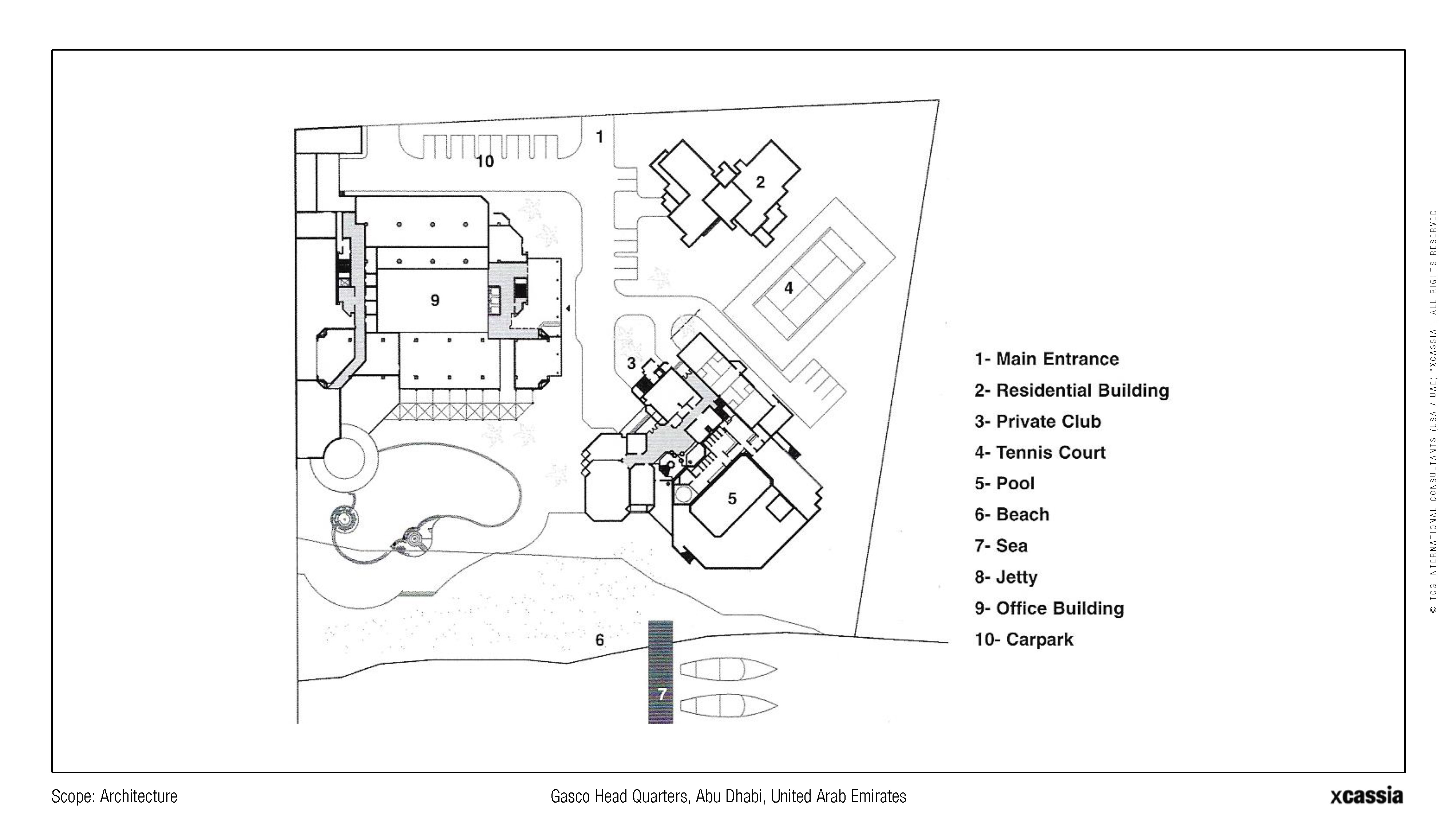 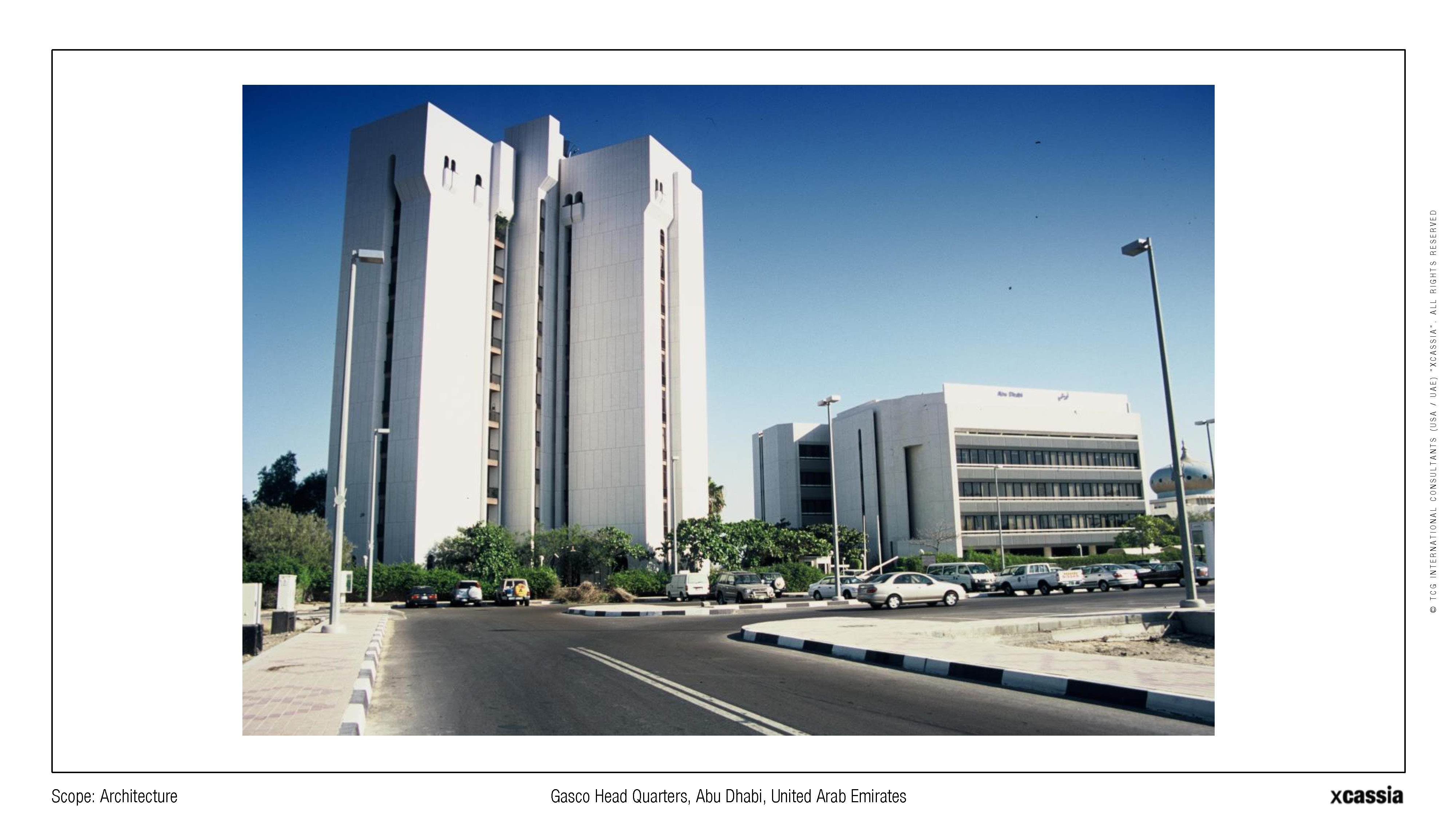 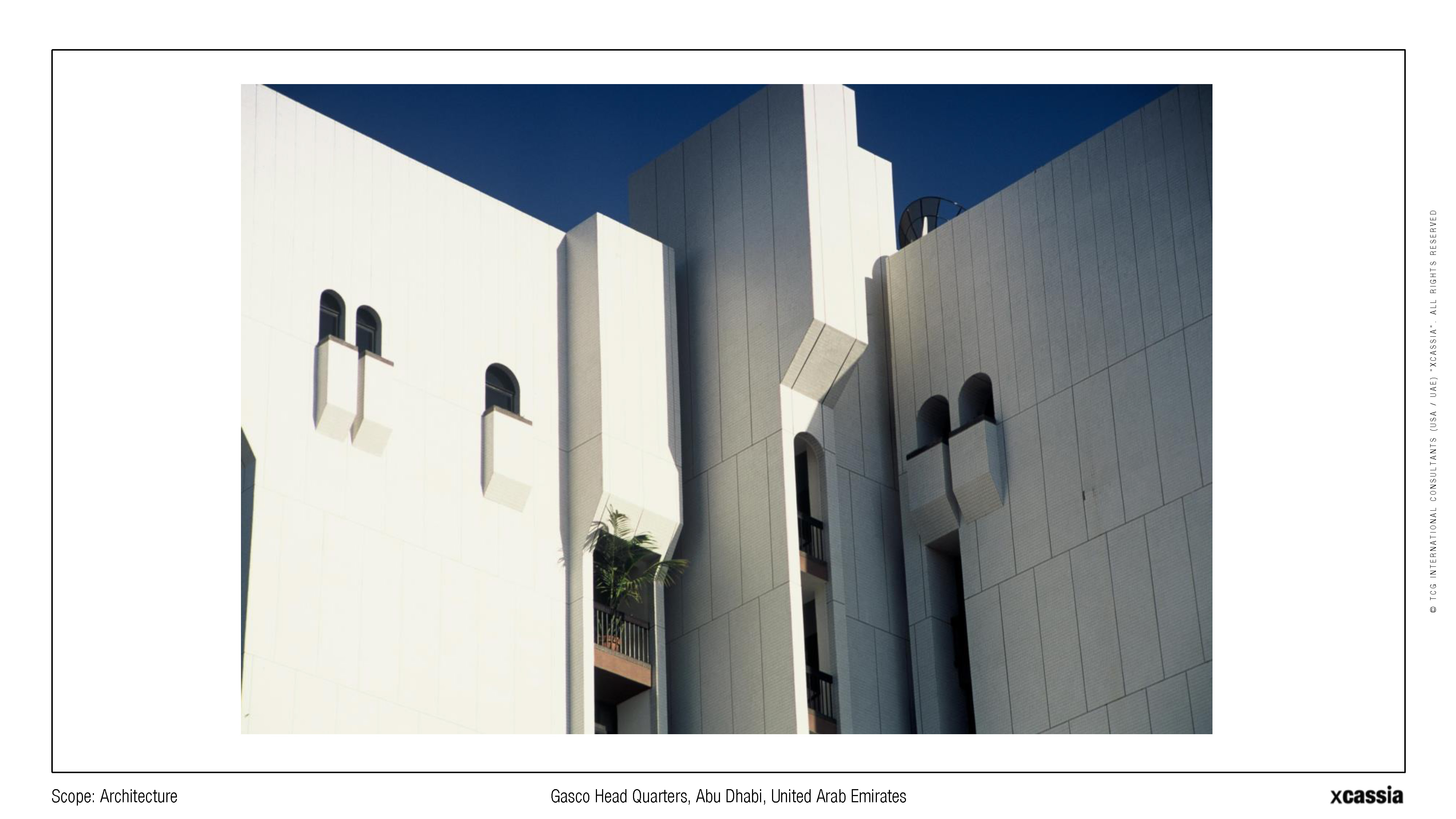 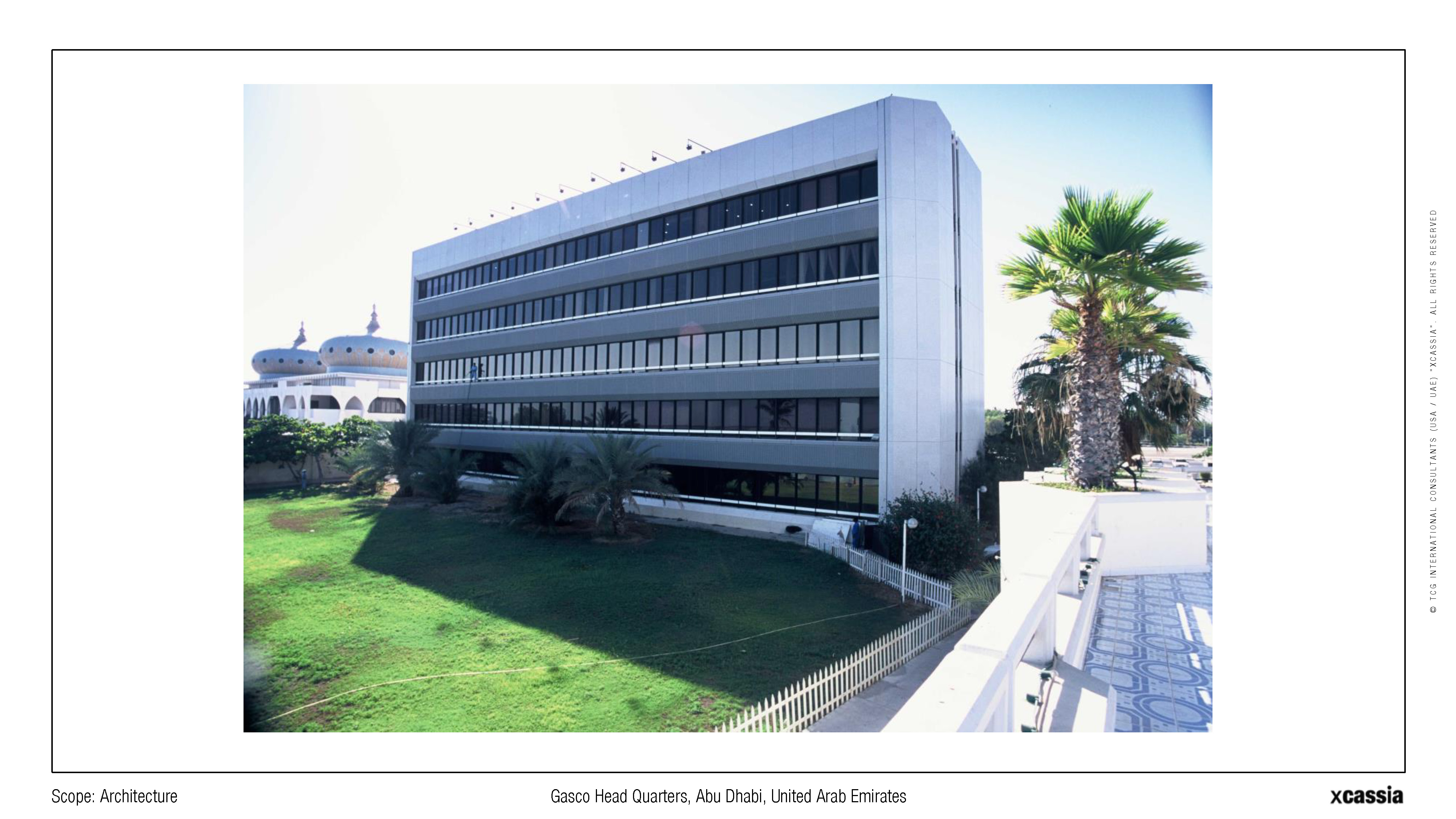 This complex is composed of three main buildings laid around a small bay area on the northern end of Abu Dhabi Island. It was built to serve as the headquarters for the local gas company GASCO. The ‘bulky’ building is the company’s headquarters. The tall tower is a luxurious residential building for the managers in the company, and the sea-front lower building is a private health and entertainment club. The complex has car park areas central to the three buildings, a tennis court behind the residential building, a pool and other leisure spaces in and around the club, and a small jetty for few small boats right on the beach front.

The office block is rectangular with a large courtyard in the middle. This courtyard is widely open to the sky and to the whole ground floor from the entrance side. It provides natural lighting for the overlooking offices and a private garden with sitting areas. The residential building is the first at the main entrance of the project and sits steps away from both the offices and the club. It faces the sea so all apartments can enjoy the spectacular and panoramic views. The club is oriented totally towards the sea. It has squash courts, multipurpose rooms, a large outdoor swimming pool, and is right on the sandy beach where a number of small private boats dock on a floating jetty.

All three buildings have white ceramic cladding. This helps reduce heat gain in the hot summer seasons. Most openings and windows are kept to a minimum and planned to be functional and effective. In the apartment block, they all face the view. In the office block, they face the west where the sun reaches only after working hours.

The architectural design throughout the complex is very sculptural. It is simple and dominated by straight lines. Wether vertical or horizontal, they provide a visual link between the buildings, and a movement within every one of them. Only a small number of architectural features are used to add to the buildings a Middle Eastern character. This is apparent in the small arches and the curved lines at the top end of the residential building. Similar curvilinear landscaping is also in the middle courtyard of the office block.